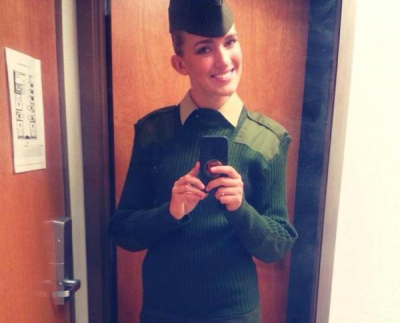 Give up your seat!

I had no idea how this simple thought would start a chain reaction of connections and spreading hope, ultimately making a memory for me and many others that ranks as one of my favorites in 2013.

I was seated on a plane minutes before takeoff a few days before Christmas. My return flight home to Arizona was FULL and so was I.  I was filled with gratitude for my early Christmas gift from my husband: a trip back to visit my family in Missouri. When three young men who appeared to be friends, approached my aisle,  I thought, Give up your seat!

Immediately I got up and moved to the last row.

A few minutes later. a tall, young woman wearing a jacket with MARINE inscribed on the back plopped down next to me. I was so excited to meet 19 year old Sarah and find out she was headed to a California base until her summer deployment to Afghanistan.   To my surprise, I also learned she was not alone-35 more marines were onboard, including the 3 young men I’d met earlier.  Our non-stop chat continued. I discovered Sarah was from a small town like me and hadn’t seen her mom, and two younger sisters in Idaho for a long time.  Her older brother, 22, is also a marine.

Her character, courage, and perseverance inspired me as I listened to her stories of overcoming personal hardship, family heartache, and physical pain- (including several fractures during boot camp that required several weeks of healing).  Sarah’s passion to serve her country and her faith in God, radiated.  By the time we landed, we had exchanged numbers, and agreed to stay in touch.  I also enlisted myself to pray for Sarah.

Did you make it to California? I texted.

Then she shared her exciting news: I’ve been granted holiday leave.    She told me she wanted to fly home and surprise her family ‘in her blues’ for Christmas but didn’t have funds for flight.

When I sensed God prompting me to help raise funds, I asked Sarah’s permission. Overwhelmed by this unexpected offering, she joyfully agreed.  A few emails and a Facebook post later, a variety of people responded to “Be a Holiday Hopelifter” and send a marine home for Christmas.  Within a couple of days Sarah’s ticket was fully funded and she boarded a “surprise” flight for home.

I am so grateful to those who gave. One out of state woman mobilized her entire family to help.  Helping Sarah go home to Idaho was our family’s best Christmas gift this year, she wrote.

God continues to amaze me when he shows up in expected ways and places.  His directive to ‘give up my seat’, started a chain reaction of hope that keeps on giving.

What is one of your favorite memories from 2013?